A digital Modified Roman font based on the Floyd A. Holes Modified Roman metal lettering plate. Both OpenType and TrueType font formats included with the download.

Created for tracing letters to be hand cut from sandblasting stencil, this alphabet saw most of its use between the 1940s and 1960s.

This Modified Roman lettering plate was created by the Floyd A. Holes Company of Bedford, Ohio. The company produced copper lettering plates for the monument industry containing the alphabets in various sizes. This alphabet was created from plate No. 1. The exact date of the creation of this alphabet is unknown at this time, but was likely created in the late 1930s. The designer of the Modified Roman alphabet on the plate is unknown, but the system of spacing was created by Egon Weiss and printed in his book The Design of Lettering in 1932. Weiss’ Lombardic and Roman style alphabets which were printed in his book were used as references for other plates by the company, but he did not design a modified style. 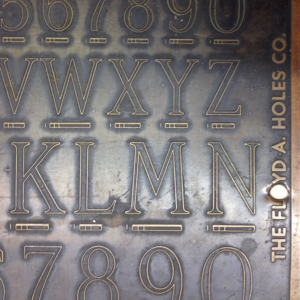 The width of the stems are about 1/9 their height. The arms are half the thickness of the stems.

Slightly rounded corners. ‘M’ tapers in unlike most modified roman alphabets. ‘U’ contains corners at its base prior to curving. ‘R’ has an elongated and curved leg typical of monument roman alphabets, but has a slightly softer curve and greater length. ‘G’ contains a spur at the base of the throat. The numeral 8 is made up of two ellipses, rather than the usual contiguous “figure-eight”. Numerals 6 and 9 round inward unlike most monument romans, and contain a serif. Numeral 4 contains a wavy crossbar, unique among monument fonts, and seen elsewhere only on the Floyd A. Holes Lombardic lettering plate. 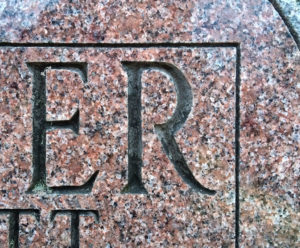 Alternate ‘R’ created by a stencil cutter. Included in the MLC font as an OpenType alternate.

The plate contained no punctuation, and as such, all punctuation and extra characters have been created by using other monument industry roman alphabets as a guide. The ampersand was created by combining the reversed 3 and the crossbar of the 4. Alternate versions of the ampersand and dash have been included from a prior version of the font created in 2009. An alternate ‘R’ has also been included, taken from inscriptions in the cemetery where the plate was used, and some creative liberty was exercised by the stencil cutter. As is common with MLC modified roman fonts, an alternate ‘W’ is included created from overlapping two ‘V’s. This ‘W’ was not included as a part of the original alphabet but was added by the MLC.