The Monument Lettering Center’s Monument Font Project aims to provide the memorialist and enthusiasts with historical information and well-designed fonts based on historical alphabets, similar to what is available for the print industry but has not yet been accomplished in the monument industry.

The MLC Font Project seeks to:

• Research each alphabet to give historic context, and where possible list its origin, including designer(s).

• Create classifications of the lettering styles into identifiable categories.

• Create historically based monument fonts in standard formats tailored to monumental work, keeping the same level of quality and technical standards used for print fonts (which has not typically, if ever been achieved in the monument industry).

By the early 20th century, lettering styles in the monument and print/advertising industries in North America began to split further apart, being tailored toward the history and technological advancements in each field. By the early 1920s, the monument industry began to create physical metal alphabets for reproducing monument-specific lettering styles by means of sandblasting; prior to this time most lettering was drawn and carved by hand, taking notes from printed materials both inside and outside of the monument industry.

In the late 19th century a growing sentiment emerged frowning on the usage of print and advertising lettering styles on memorials, as largely a classless practice. This trend continued largely until the mid 1970s, when typefaces created for the print industry, such as Helvetica and Univers were introduced into the monument industry through plastic stencil press letters. The MLC does not intend to recreate these print industry fonts which can be purchased elsewhere, but seeks to create digital fonts from the historical lettering styles created specifically for stone engraving.

Features and benefits of fonts created by the MLC

MLC fonts are created to be historically accurate, well-drawn with smooth curves (without awkward or jagged angles and ellipses as is often seen in the industry), proper and full punctuation marks, and extensive kerning. At least half of the time spent creating an MLC font is used on kerning alone.

MLC monument fonts are available in OpenType and TrueType formats (when purchasing a license you will receive both formats). With fonts in these formats, no longer will headstone manufacturers be constrained to using any one particular design software. MLC fonts may be used in any software that supports Opentype or TrueType fonts, including Adobe Illustrator, CorelDRAW, and flexiSIGN; or design software that allows importing, such as Gerber Omega, SignLab, and Monu-Cad. It is unfortunate that most monument design software will not natively support standard font formats. The files must be imported, which often breaks kerning and special features like stylistic alternates and ligatures. *Not all features are guaranteed to work after being imported into a specific software, and for this reason, the MLC lobbies strongly for the use of programs like Adobe Illustrator or CorelDRAW in the monument industry. In the case of CorelDRAW, the MemorialDESIGNER add-on is highly recommended, as it will transform the software into a powerful monument design application.

As of October 2017, all MLC fonts now come with the option of “type” or “memorial” sizing. Font files for both sizing types are included with each download.

The “TYPE (PRINT) SIZING” folder contains fonts with standard print type font sizing, which does not correctly relate to physical sizes in most design software. These applications typically calculate the letter size by adding the ascender area to the cap-height.

The “MEMORIAL (PHYSICAL) SIZING” folder contains the fonts with the ascender area removed, allowing the software to base the font size only on the cap-height of the letters. In this way when 1” is input into the font height dialog, the user should actually get a 1” letter. The downside of this sizing method is that the ascender area is removed from the line-height, greatly shortening the spacing between lines. In most cases this is not an issue, but when using letters with diacritic marks for multilingual layouts, the marks may run into the text above or below the letter. This is easily fixed by manually adding more space between lines (leading).

Unless specifically noted on a fonts download page, all MLC fonts include the following features:

Because of the limitations of needing to create tangible metal or plastic alphabets, most historic monument alphabets were given very limited character sets, and many were given little to no punctuation at all. The MLC is modernizing these historic alphabets by adding full punctuation sets and many other extra glyphs and symbols.

Multilingual Support for Latin-based languages, including Vietnamese, Spanish, French, Italian, and German. Because there was historically no capital sharp S in German, for MLC fonts containing small caps in place of lowercase glyphs, the German sharp s (ß) or Eszett is included as ‘ss’, in order to allow for pasting German text into a design without causing any issues with missing characters.

To access the stylized dashes without OpenType support, simply type an en-dash (–) or em-dash (—). On an Apple computer, this is done by simply typing option+hyphen or option+shift+hyphen, but on a PC it is somewhat more involved, and depending on your software it may cause extra difficulty–though some software (including Flexi, SignLab, and CorelDraw) will allow you to select them from a list of special characters. On a PC you must have a keyboard with a number pad, then holding the alt key, type 0151 or 0152 on the number pad to get the long dashes. When Opentype features are supported, more dash lengths are available by typing angle bracket (greater-than and less-than symbols) and hyphen combinations: <->, <–>, <—>, etc. By adding more hyphens you will add length to the dash. Check the capabilities of your design software for OpenType support.

Though it is a glaring error in typography, it has historically often been the habit of many in the monument industry to flip the left quotation mark in order to mirror the right mark. This treatment is often also requested by customers purchasing a headstone. For ease of use, MLC fonts include this alternate left quotation mark which may be accessed as stylistic alternates. A mirrored left single quote is also included with each font. Legacy versions of the MLC fonts included this feature as a <“> or <‘> ligature. If you have a legacy version and would like the updated version of a purchased font, please contact the MLC. OpenType support is needed for this feature, check the capabilities of your design software.

Various alternate characters (stylistic alternates) created specifically to aid monument makers are also included in MLC fonts. The MLC will always include any known alternate characters first included with the original alphabet.  Whether present in the original or not, typically included in all roman styles is a second version of “W” created by combining and modifying two overlapping V’s. Five alternate versions of the lowercase or small-cap “c” are included with various combinations of underlines and dots traditionally used for abbreviating Gaelic Scottish and Irish names such as McGee (shortened from MacGee), and often used for abbreviating words on Colonial and Victorian era gravestones. OpenType support is needed for this feature, check the capabilities of your design software.

Because of these features, MLC fonts contain a large character set, uncommon among monument industry fonts. See the character map below to view a common character set: 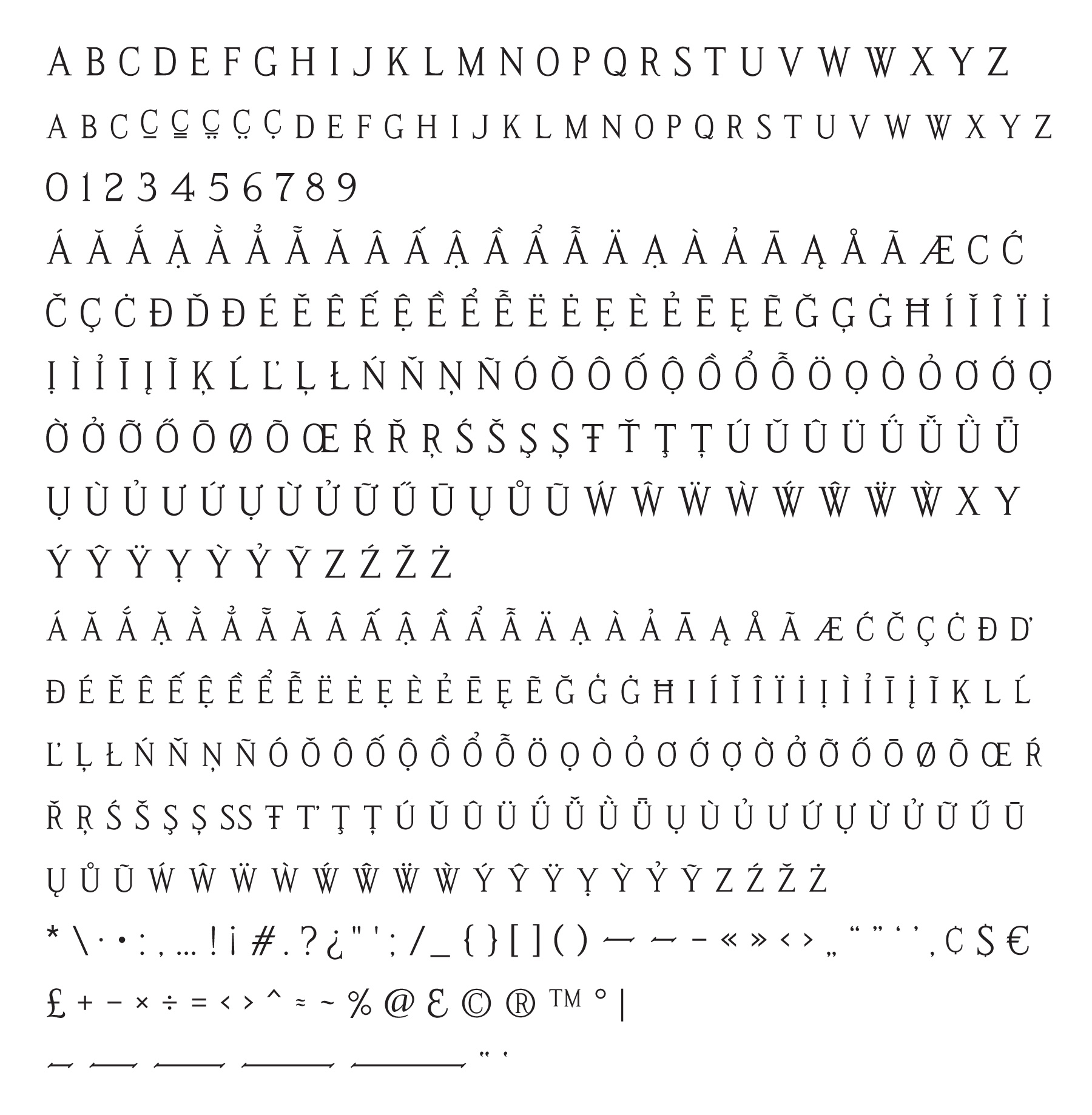 View the MLC Font Catalog
Back to top