A digital font based on the plastic ScotchKut Modified Roman Heavy Bar alphabet used for pressing letters into sandblast stencil. Both OpenType and TrueType formats included with the download.

The ScotchKut Modified Roman Heavy Bar was designed by the SKS Company as a slightly bolder weight of their Modified Roman alphabet, but unlike most alphabets was only available at the smallest 3 sizes: .75″, 1″, and 1.25″. Sometimes confused with the Raised Modified Roman, the original SKS letters were typically a darker warm grey color, and along with the SKS diamond logo, contained a small H.B. inscription on each letter. Sets produced later by 3M after the purchase of the SKS company did not include the raised H.B. initials. 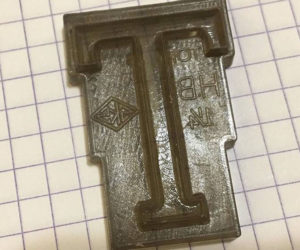 Unlike most alphabets, other than the slight increase in boldness of the letter bodies and serifs, there are no features which distinguish this alphabet from the regular SKS Modified Roman.