Digital Double Outline fonts based on the larger sizes of ScotchKut Double Outline plastic letter sets (1.25″-3.5″). Both OpenType and TrueType formats are included with the download. 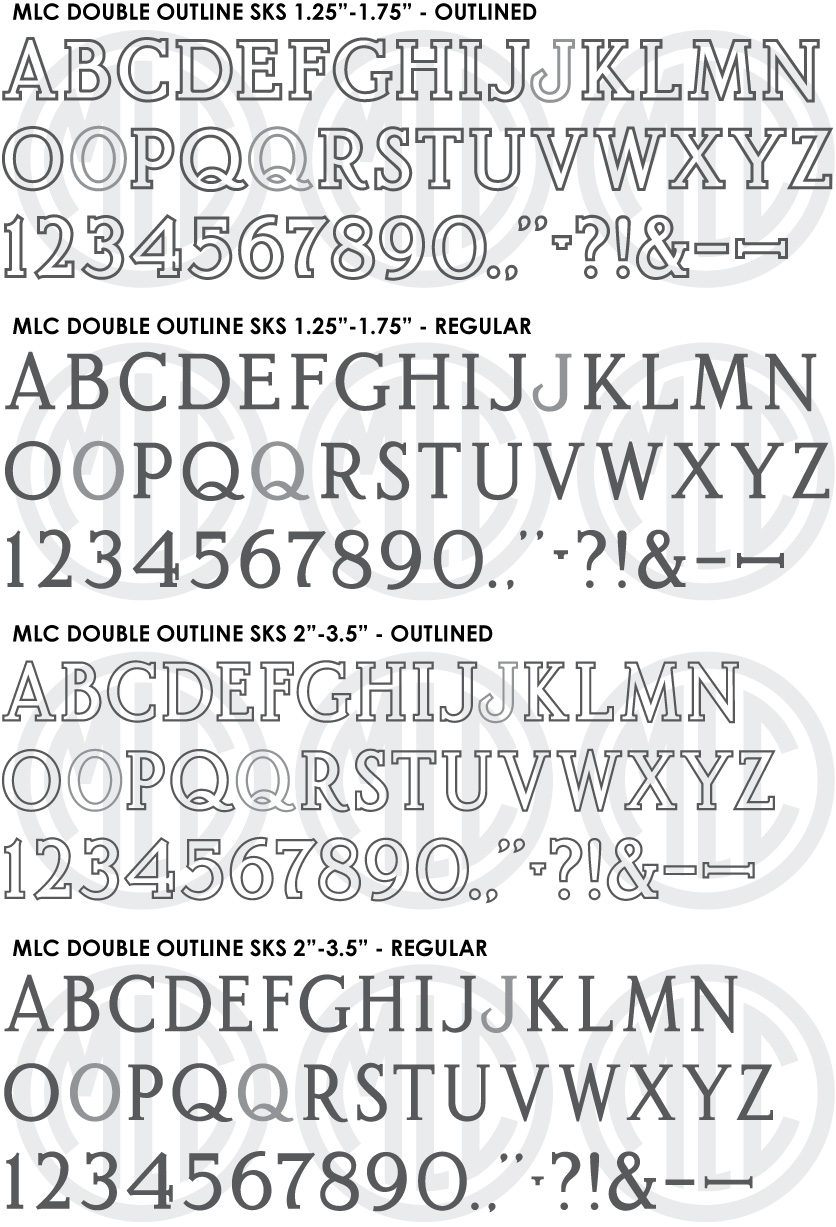 Created as a plastic alphabet for cutting sandblast stencil, the SKS Double Outline has seen consistent usage since it’s creation in 1968. Beginning in the digital era, the larger sizes were widely digitized in various memorial designing software, which has helped keep the style in use. However, it has rarely been accurately digitized at all sizes–typically representing the alphabet at only one size, and modifying the thickness of the outline in an attempt to match the remaining sizes. Unfortunately fonts where this method of digitization has been implemented, the fonts will not match lettering in the cemetery at any other sizes. A version of the SKS Double Outline was digitized in Cochran’s memorial design software, Monu-Cad, and the now defunct Craftech. The names used for the fonts in these programs are “Frosted Outline”, “Outline Roman”, and “Outline”.

At times, memorial manufactures have used the SKS Double Outline alphabet to created a non-outlined Roman letter by removing the inside section of sandblast stencil after pressing the letters. As with all other outlined MLC fonts, a non-outlined version at each size has been included in order to match these inscriptions, and for the ability to add a custom outline thickness to the letters.

At all sizes, the leg of ‘R’ distinguishes this alphabet from other Outlined Roman styles. Rather than being curved, the leg is straight until it reaches the baseline and hooks upward. The crossbar of ‘4’ is shorter as it exits the right side of the vertical stroke than it is in any other Monument Roman alphabet, giving it a stunted look. The SKS Double Outline alphabet contained 3 distinct styles at specific size breaks (1″, 1.25″-1.75″, and 2″-3.5″). The relative outline thickness also changes at these sizes. Due to the considerable differences in the design of the 1″ alphabet, the MLC separated the fonts into two groups (Small and Medium-Large) which will nest together when both licenses are purchased and all versions of the font are installed.