Digital fonts based on the Art-Line alphabet designed by PMD’s Cutrite line of stencil press alphabets. Both OpenType and TrueType font formats are included with the download.

*Use coupon code “art35” to receive $35 off when purchasing a license for both this and the Edward R. Peterson Art-Line font at the same time. 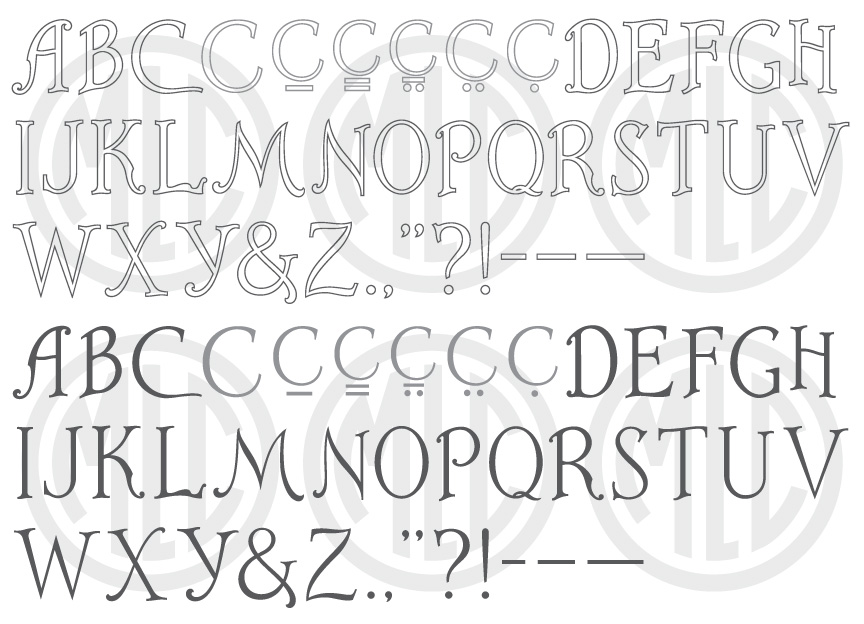 This version of the Art-Line alphabet was created by PMD International as a plastic stencil press alphabet in the 1980s, and though it is still used today, saw the majority of its usage until the 1990s. It was digitized and included as a font in the memorial design software “Craftech”.

This alphabet was modified from an earlier alphabet by Edward R. Peterson, of Peterson Memorial Design Service. The designer of this version is unknown. Just like Peterson’s original, the alphabet was designed as drop-cap or decorative initials to embellish the outlined lettering in a family name. The style has also been referred to as “Hallmark” lettering when the original name was unknown.

The most features distinguishing the Cutrite alphabet from the original by Peterson are the re-designed ‘N’ and ‘Q’. Along with these letters, the alphabet is slightly thinner and more delicate, as well as containing minor, yet noticeable differences on most letters. The original ‘N’ was designed by Peterson as a Sans-Serif letter, while the Cutrite version contains both a swash and a serif on its stems. The Cutrite ‘Q’ does not overlap the letter as did the original.

No numbers, punctuation, or lowercase were included with the alphabet. The MLC has included a second version of the font which does not contain an outline, which is applicable when the user would like to add an outline of a different thickness than was included with the original, or not include an outline at all. All punctuation was created by the MLC, and the Monument Lettering Center also created alternate versions of the letters ‘C’; which is available both as a lowercase letter, or as an OpenType alternate in software that support OpenType features. Roman numerals have been used in place of numbers, and although the likelihood of needing the features is rare, all kerning and diacritic marks for multi-lingual support typical of MLC fonts has been included.