Allied Industrial Sales Corporation was a company created in the early 1970s by John Gaspari and Imre Adler in Quebec, Canada. The company operated until its bankruptcy in 1976. 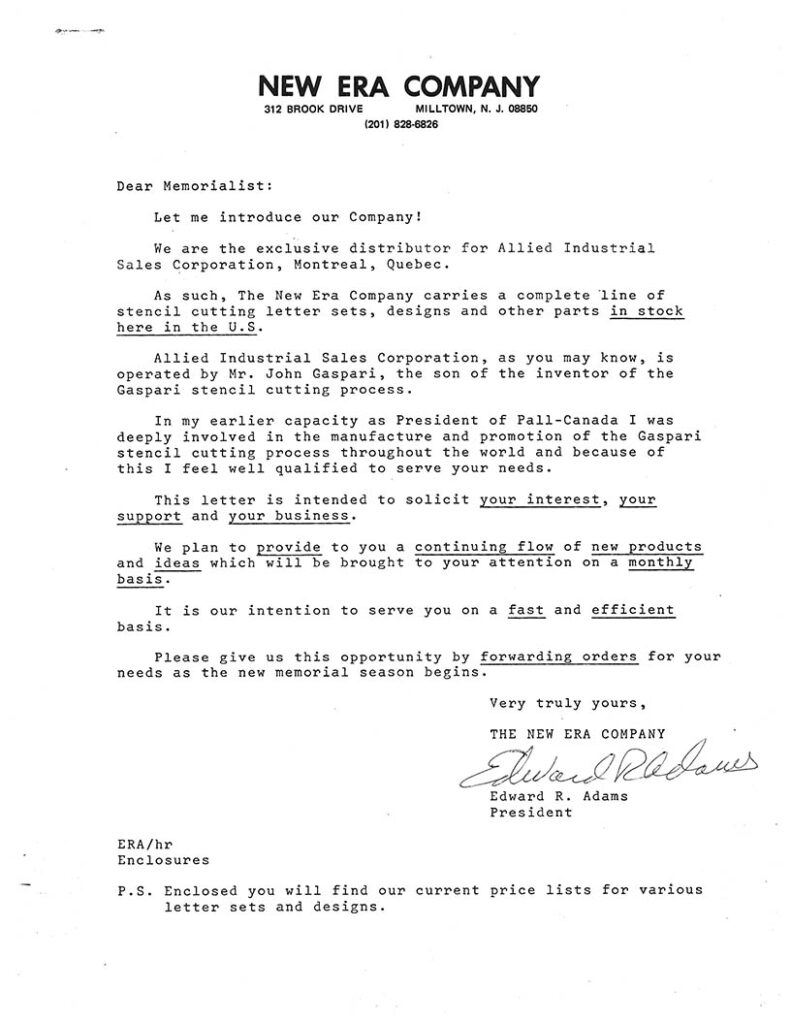 The story of AISC:

After a rift developed between inventor Anthony Gaspari and PALL (Canada), Gaspari secretly worked up new design and letter master templates for his son John, including new versions of 6 popular alphabet styles. Taking the templates, John Gaspari partnered with Imre Adler to begin producing stencil press designs and alphabets under the name Allied Industrial Sales Corporation (AISC). The two leveraged Imre’s years of plastic molding experience along with his plastics company, Associated Crafts, to produce the plastic cutting dies. At the outset, the AISC alphabets and designs were distributed by a newly formed company, New Era, under the leadership of the former president of PALL (Canada)’s Stencil Cutting Machine Division, Edward R. Adams. Adams named the new distribution company after a marketing phrase printed on the first page of the original PALL Memorial Design binder, “A new era”. After only a short time, the relationship between New Era and AISC collapsed, and John Gaspari and Imre Adler began selling directly to monument dealers by mail order.

During the mid-1970s AISC was failing to become profitable, so the two partners decided to bring in accountant Jerry Kawalek as a third partner. Before long there was another falling out, this time between the original two partners, and Gaspari and Kawalek attempted to push out Imre and gain control of the business. The result was a business that quickly became financially unviable. By 1976 AISC filed for bankruptcy, and as a result, Imre’s son Fred was able to gain control of the company’s assets. Fred Adler quickly began producing the AISC cutting dies under the new name of Cutrite Systems, distributing them with his new plastics company, PMD International.

* This list was derived from the original New Era mailing packet. More AISC alphabets may have been created after this point. If you have any later New Era or AISC catalogs or materials, please contact the MLC.