Digital fonts based on the plastic ScotchKut Government alphabet used for military headstones. Both OpenType and TrueType formats included with the download.

Receive $35 off when you purchase both this font and the MLC Spacerite Government font at the same time. Use coupon code “govt35“.

The ScotchKut Government font was created as a stencil press alphabet in 1968, for sandblasting military veteran headstones, and is still used today for this purpose.

The original version of the Government font was created by the Spacerite Company in the 1940s as a metal letter set, but little else is known about its creation. In 1968 SKS Limited (later ScotchKut) created this version as a plastic alphabet used to punch the letters directly out of sandblast stencil using a press. Many modifications were made to the alphabet at this time by SKS Ltd. The is one of two versions created in 1968, the other being by Gaspari and Pall Canada.

Like the original, a generally Classic Roman style was used to create the geometry of the letters, but many changes were made by the SKS Limited when designing this version. The serifs are cut away from the stems at angles and end in points, instead of the typical serif shapes. This, along with slightly fatter features on most letters and numbers give the alphabet a slightly less refined look than was displayed in the original design. The tail of ‘Q’ is smaller, and the finial of ‘J’ much wider than was present in the original design. The crossbar of ‘A’ is was moved down much lower from the original design to avoid problems with blowouts during sandblasting at smaller sizes, which make the letter feel slightly like a caricature of itself, a common phenomenon when moving a crossbar too high or too low from center. This is allowed by the VA, as is noted on the lettering pages provided to manufacturers. 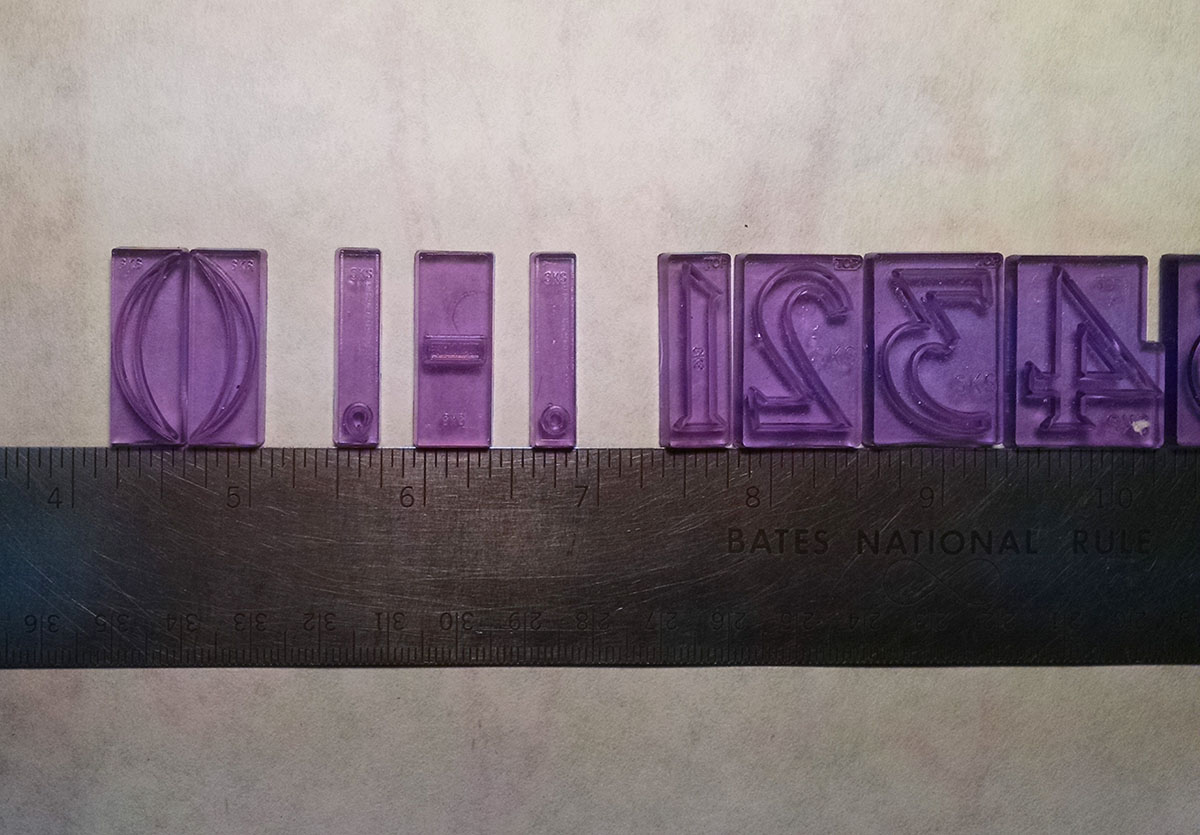 Plastic punctuation and numbers from the ScotchKut Government alphabet.

The MLC has included all punctuation and diacritic marks allowed by the Veterans Association. These include a hyphen, ampersand, parenthesis, colon, slash, and apostrophe; and the diacritic marks being the acute, grave, dieresis, tilde and macron. The ScotchKut alphabets included the allowed parenthesis, but also contained periods and commas which are not allowed on VA markers. The MLC has created two versions of the font, “Regulation” and “Extended”. The Regulation character set includes only the letters, numbers, punctuation marks, and all possible combinations of letters and allowed diacritic marks; while the Extended set contains all of the typical characters included in MLC (including over 400 glyphs used for multilingual support, full punctuation and other features). In the Regulation font these extra characters have been replaced by an ‘X’ icon, providing a visual cue that the typed glyph is not allowed on a Government issued headstone. In standard design software, flipping back and forth between the two fonts is quite easy as the two versions are loaded as styles of the same font.

Notice the characters not approved for use by the VA displaying as ‘X’s when using the ScotchKut Regulation font.