Based in Quebec, Canada, Anthony M. Gaspari and PALL (Canada) Ltd. worked together from 1968 until sometime in the early 1970s to create stencil press designs and equipment for the monument industry.

The story of Gaspari & PALL:

In 1968, Anthony Gaspari receives a patent for his stencil press design, and partners with PALL (Canada) Limited, a subsidiary of PALL Corporation, to produce and market the presses, along with plastic cutting dies through their Stencil Cutting Machine Division. The same year, SKS Limited also applies for patents for stencil presses and cutting dies, and a race begins to market the new technology to the industry. Gaspari creates the first set of design elements for PALL, which are quickly put into marketing packets and sent out to various monument dealers. Before the year’s end, PALL would produce a portfolio binder including printed designs, alphabets, and information about the new cutting die process; also adding more design elements and design layouts by well known memorial artists C. Conrad Kenerson and Elmo Peduzzi. 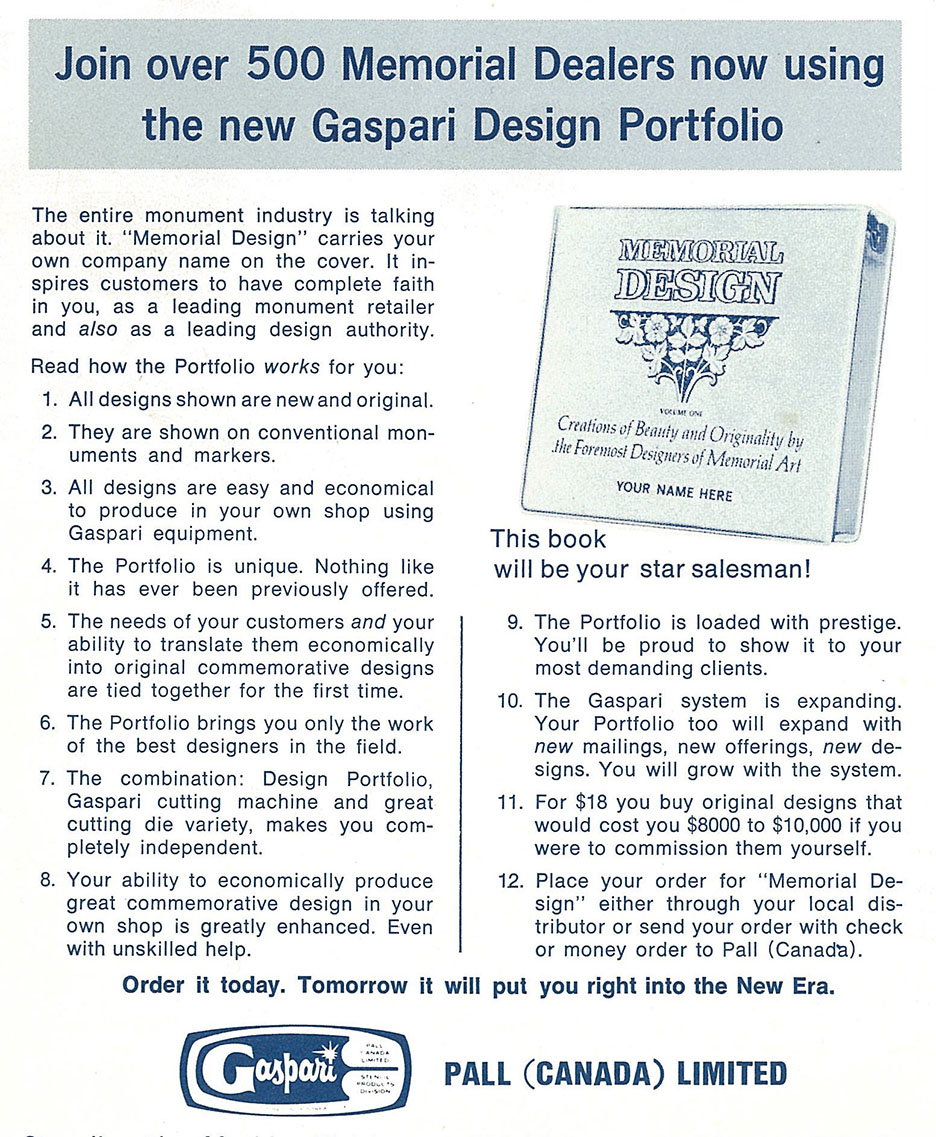 The binder is promoted as bringing “…memorial art into a new era”. Along with SKS, the majority of Gaspari’s alphabets are based on the most popular Spacerite alphabet styles, adding a few new styles of his own including Triple Outline and Polished Edge. The PALL line of alphabets consisted of 12 styles, and as well as it is known by the MLC, all designed by Anthony Gaspari.

Only a few years pass before a rift began to develop between Gaspari and PALL, and by the early 1970s, Anthony Gaspari begins creating new sets of alphabet and design master templates for his son John Gaspari, who would go on to create the Allied Industrial Sales Corporation. Before long, the PALL line of stencil cutting dies is sold to its competitor, SKS Ltd. The SKS company continues producing the PALL dies for a short time before they are acquired by the 3M company in 1975. It is believed to be at this point that the PALL alphabets are discontinued, though 3M continued to produce the PC (PALL Canada) line of design elements. Later, many of the PALL style alphabets were once again produced by PMD International under their Cutrite Systems line of stencil press equipment.

* This list was derived from the original PALL Canada “Memorial Design” Binder. More PALL alphabets may have been created after this point. If you have any later PALL catalogs or materials showing later fonts created by PALL, please contact the MLC.