Digital fonts based on ScotchKut’s stencil press version of the Condensed Roman alphabet. Both OpenType and TrueType formats included with the download. 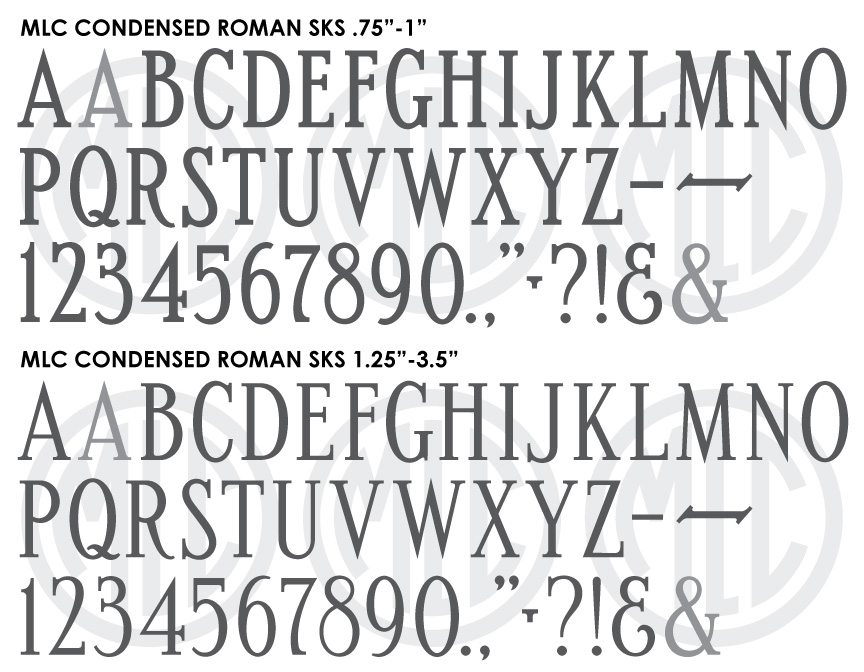 Created for use with a stencil press for sandblast engraving, this alphabet was designed to accompany the SKS Modified Roman alphabet. This version of the condensed roman style is the most common version seen in the cemetery, and is still used today by some manufacturers who have not updated to digital technology.

The designer of the alphabet is unknown, but was likely one of the two founders of SKS Ltd.

Like the ScotchKut Modified Roman, this alphabet contained differences at the various size breaks, and the MLC has created multiple versions for matching inscriptions at any size. The alphabet was sold by SKS in small sizes (.75″ – 1.75″) which contained numbers, and large sizes (2″ – 3.5″) which did not come with numbers.

The alphabet contained a comma, a period, a dash, and a bullet. All other punctuation and extra characters have been created by the MLC. A second version of ‘A’ is included with a lowered crossbar, which helps with blowouts at smaller sizes, and was sometimes modified by hand-cutting an extra line below the crossbar and removing this new lower crossbar instead of the higher one before sandblasting. No ampersand was included with the alphabet, but the MLC has included two versions in the font. The first is a thickened version of the original Spacerite Condensed Roman ampersand, and the second is a condensed version of the ampersand included with the Modified Roman. The alternate ‘A’ and ampersand are included as stylistic alternates, available when using software which supports OpenType features.