Digital fonts based on Spacerite’s original Modified Roman alphabet. Both OpenType and TrueType formats are included with the download.

Receive $25 off when you purchase both this font and the Spacerite Modified Roman Handcut font at the same time. Use coupon code: “handcut25″

* Only the basic character set is shown here. For a sample character map see the MLC Font Project page. Alternate characters shown in grey. Note that the MLC has created two versions of the font with varying serif thickness, both included with the download.

This alphabet saw most of its use from 1925 until the 1960s, though it continued to see moderate use well into the 1990s, and is still in fact used by some headstone manufacturers today.

The alphabet has very thin serifs compared to all later modified roman styles, which give it a more elegant feel. The most notable difference of the letters is the construction of the ‘W’, which looks like two overlapping ‘V’s rather than containing an apex at the center (though Spacerite did later produce an alternate version of ‘W’ with an apex). The crossbar on ‘A’ is much higher than later versions, and the tail of ‘Q’ connects to the left side of the bowl. The outside joint of ‘5’ at the beginning of the downward curve bends inward and has slightly rounded corners, which differs from all other modified roman alphabets–though, as this alphabet is cut by hand, this feature was not always followed by the stencil cutter. 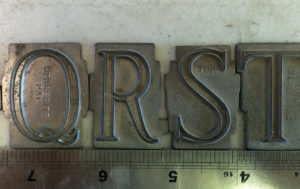 The original alphabet contained no punctuation, but the company did eventually produce multiple dash lengths and though very rare to find, an ampersand. An alternate ampersand from a version prior to the discovery of the ampersand is included. It was created by reversing the 3 and adding a longer lower finial, typical of many modified roman alphabets. All other punctuation and extra characters have been created by using other monument industry roman alphabets as a guide. Though also very rare to find, the Spacerite Company did create a second ‘W’ with a center apex. The second ‘W’ is available in the MLC font as an alternate, when using software which supports OpenType features.