Digital font based on Spacerite’s Uncial Gothic alphabet. Both OpenType and TrueType formats included with the download.

This alphabet was created for sandblast engraving, and has seen moderate to low usage since it’s inception, having been digitized early on in the digital era in various monument software including Cochran’s and Monu-Cad.

The alphabet was designed for the Spacerite Company by Edwin S. Carter, as shown in the advertisement below. No other information about Carter is known at this time. 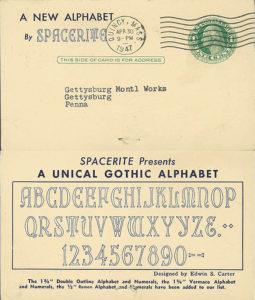 The Spacerite Condensed Roman alphabet was released in 1947, as “A Unical Gothic Alphabet”. It is unclear if the term “Unical” was simply a misspelling, or if the company incorrectly named the font, unaware of the correct spelling. On a promotional mailer from 1947, the misnomer is seen in multiple places on both front and back, so it is unlikely that this was simply a spelling error. The name was corrected by the 1950s to “Uncial” in subsequent promotional materials however. For this reason the MLC has not kept the original name, though some in the industry still use the term “Unical”. The alphabet itself is actually Lombardic and not an Uncial, though there has commonly been confusion between the two styles.

The original alphabet included a few more punctuation marks than typical, and multiple alternate characters. Alternate characters for ‘E’, ‘W’, ‘Y’ were included, and the MLC has added to these in order to match modifications made by stencil cutters and memorialists. A second version of ‘E’, two versions of ‘F’, a version of ‘W’ made by flipping ‘M’ upside down, a second ‘L’, and an alternate ‘T’ are all included. The punctuation included a period, left and right dash sections, bullet, and ampersand. Some digitized versions did not use the original round punctuation, but instead replaced it with angled marks. The MLC included similar angled punctuation in order to match existing memorial inscriptions in the cemetery. As always, the MLC has included multiple versions of lowercase ‘c’ with various line and dot combinations used for Gaelic surnames. All alternate characters and punctuation marks are included as alternates available in software which supports OpenType features.