Digital fonts based on the original metal Government alphabet by the Spacerite Company. Both OpenType and TrueType formats included with the download.

Receive $35 off when you purchase both this font and the MLC ScotchKut Government font at the same time. Use coupon code “govt35“.

The Spacerite Government alphabet was created in the 1940s specifically for sandblasting government issued headstones for military veterans, and has been used as ever since.

The Spacerite Government font is the original version of the standardized lettering used on Government issued headstones for military veterans. The designer of the alphabet is not known, and not much is known by the MLC about its history other than the fact that it was created for the government by the Spacerite Company sometime in the early 1940s. Prior to this time there was no standard lettering style, and as a result the lettering on the VA headstones varied depending on the manufacturer. During the 1960s and 70s at least two other versions of the font were created by the stencil press companies PALL Canada and SKS Limited (later ScotchKut), which modified the alphabet with slight changes. Since the digital era of design started to be utilized in the monument industry, numerous digital versions of the font have been introduced, some extremely poorly designed and often not following the Veterans Association regulations.

A generally Classic Roman style was used in creating the alphabets geometry. The Spacerite version of the Government alphabet can be identified by a number of features, many of which give it an overall classier look than later variations of the font. The serifs curve out away from the stem towards a flat end, unlike the later stencil press versions which are cut away from the stems at angles and end in points. The tail of ‘Q’ is much larger, and the finial of ‘J’ much narrower than is present in later versions. The crossbar of ‘A’ is correctly just below center (typical renaissance roman form giving the letter a balanced look) but leaves a small counter, which can cause problems with blowouts during sandblasting at smaller sizes. The VA later stipulated that slight modifications in letter geometry are allowed in order to reduce the occurrence of this issue, and subsequent versions of the alphabet dropped the crossbar to account for the problem. Because it is allowed, the MLC created a second version of ‘A’ with a lowered crossbar for the Spacerite Government font to help with this problem. 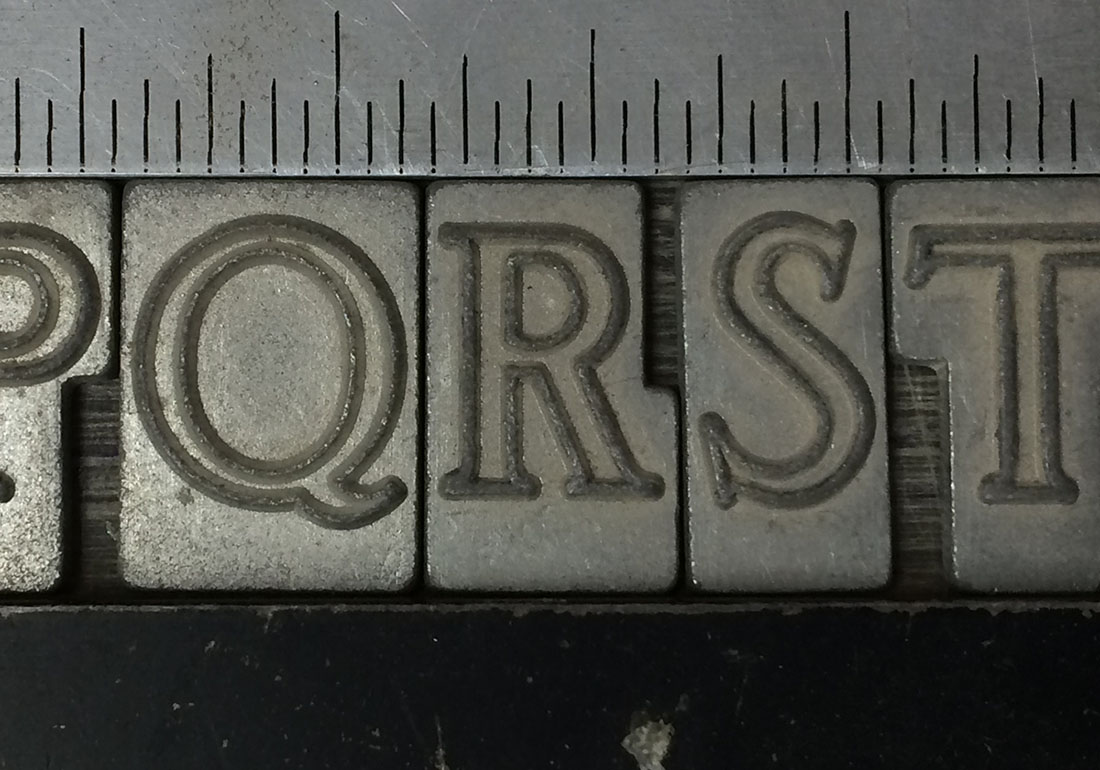 The Veterans Association has strict rules on the allowed punctuation marks for government issued headstones, and due to the VA drawings of the alphabet displaying representations of the Spacerite letters, the original metal alphabet likely contained only a hyphen and apostrophe. The MLC has not yet found any Spacerite Government sets with any punctuation to verify what was originally included. Either way, the VA now allows the use of a hyphen, ampersand, parenthesis, colon, slash, and apostrophe; as well as a few diacritic marks including the acute, grave, dieresis, tilde and macron. The VA drawings and the ScotchKut Government alphabet were consulted for the design of the allowed punctuation marks not found in the Spacerite sets. The MLC has created two versions of the font, “Regulation” and “Extended”. The Regulation character set includes only the letters, numbers, punctuation marks, and all possible combinations of letters and allowed diacritic marks; while the Extended character set includes over 500 characters typical of MLC fonts which give multilingual support, full punctuation, and other features. In the Regulation font these extra characters have been replaced by an ‘X’ icon, giving a visual identifier that the character is not allowed on a Government issued headstone. In standard design software, flipping back and forth between the two fonts is quite easy as the two versions are loaded as styles of the same font. The Extended set also contains a second version of ‘R’ found by the MLC in a set of metal Spacerite Government letters containing a much shorter leg, and there is currently no known explanation of why this second ‘R’ was created. As mentioned, there is an alternate ‘A’ included in both styles of the MLC Spacerite Government font to be used for small sizes. These two alternates are available as OpenType alternates when using software which supports OpenType features.

Note the characters not approved by the VA displayed as ‘X’s when using the Spacerite Regulation font.