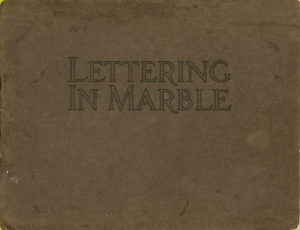 Front cover of the Vermont Marble Company’s 1923 “Lettering In Marble”.

After searching for some time, The Monument Lettering Center recently acquired an original copy of the 1923 Vermont Marble Company booklet for the memorial industry titled Lettering in Marble.

Below is the books forward by the unknown author:

The purpose of this booklet is to provide examples of the established styles of lettering and to suggest arrangements of inscriptions suitable for present-day memorials.

These pages stand first of all as a brief digest of the more exhaustive works of recognized authorities. Much of the data relative to marble, the material and its treatment, is based upon our long experience in the solution of problems common to both the large organization and the individual craftsman.

The historical models for letters of stone were produced by thorough and versatile craftsmen whose work has endured because of its fidelity to the sound traditions of the craft. While there are in our modern cemeteries many memorials which would be a credit to any age, they are frequently surrounded by crudely finished stones upon which the identifying record is inscribed in large and characterless letters.

Let us bring to our records in stone a nice regard for those letters which have stood the test of time. Inscriptions derived from approved historical examples will impart distinction to the most unassuming of memorials. The only really permanent tribute is the one in wnich the touch of the artist persists long after the personal interest has faded.

In light of the current state of lettering in the industry, it could not be more profitable for those who produce memorials in the modern era to take the advice of the unknown author who wrote these words. Later on in the booklet, the author added:

It is unfortunate that in our industry, which exists primarily to produce durable records, more thought has not been given to the rules of architectural lettering and to the styles which have stood the test of time. Many of the stones now standing in our cemeteries bear striking evidence of our faulty methods.

Pages 10-11 of Lettering in Marble, featuring a Renaissance Roman alphabet.

The booklet contains 10 beautifully drawn alphabets with written explanations. Also included is a brief history of memorial lettering, various lettering treatments, spacing instructions, as well as design layouts utilizing various alphabets. Though it is a relatively small treatment of the subject, the booklet is a wonderful resource of historical lettering styles and information, as well as a reminder of the thoughtfulness with which the subject should be understood and practiced.

Pages 20-21 of Lettering in Marble, featuring an Incised Roman alphabet.

The alphabets contained are as follows: