View cart “MLC Signature Series Commercial Gothic” has been added to your cart.

A Digital font based on the reworked ‘Common Gothic’ style alphabet by the Vermont Marble Company, printed in the 1923 booklet Lettering In Marble. Both OpenType and TrueType formats included with the download. 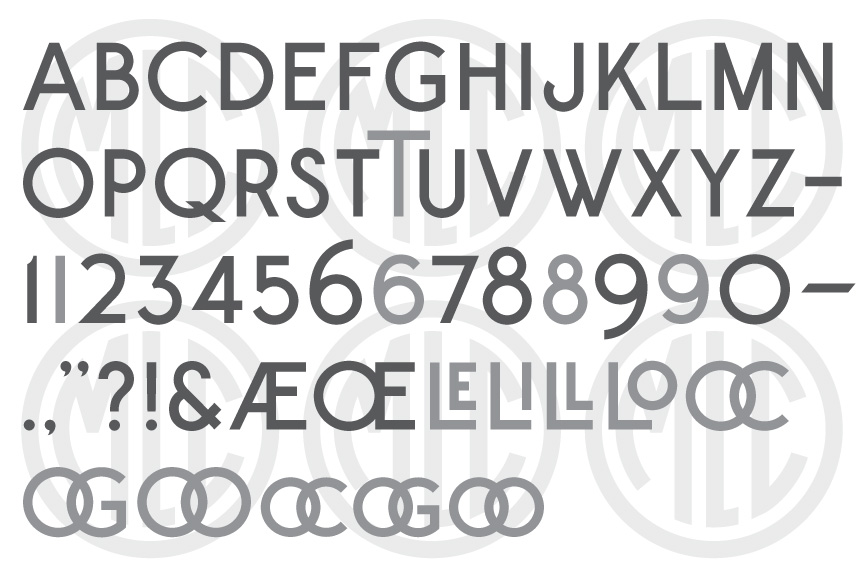 This alphabet was created for hand carving. It is unclear if this style of lettering was ever actually widely used on memorials, or if it was simply a neglected attempt by the company to provide an alternative to the popular commercial or “common” gothic alphabet which was maligned by so many in the industry due to its lack of style. This font may be found useful today by both sandblast engravers, or modern letter carvers laying out designs prior to hand carving, and is especially suited for engaged lettering.

This alphabet was created by the Vermont Marble Company and released in its 1923 booklet Lettering in Marble. The author of the booklet likely designed each of the alphabets included, but is unfortunately not credited. 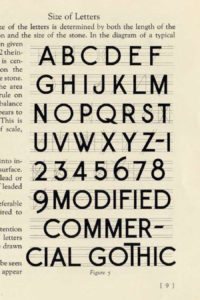 The modified commercial gothic alphabet is based on a 60 degree and 45 degree angle construction, using a classic roman type letter geometry.

This geometric sans serif alphabet has circular curves, unlike standard commercial gothic styles. Numerals ‘6’ and ‘8’ extend above the cap-height, and numeral ‘9’ extends below the baseline.

The alphabet was printed with no punctuation except for a dash, and as such, all extra punctuation and characters have been created by by the MLC. The booklet also shows an alternate capital ‘T’ which extends far above the cap-height, and has been included in the font. The MLC replaced the numeral ‘1’ of the original design with a a notched ‘1’, but kept the original as an alternate; and also added several other alternates and ligatures including versions of ‘6’, ‘8’ and ‘9’ that do not extend past the cap-height baseline. These characters are available as OpenType alternates when using software which supports OpenType features.