Robert “Bobby” Knox was a memorial draftsman and inventor from Berlin, Vermont. Knox worked for the Jones Brothers Co. in Barre, Vermont from around 1910 until at least 1942.

In 1916 Knox gave up his position as a drafting instructor at the Evening Drawing School in Barre Vermont due to advancement at the Jones Bros. Company. Although not confirmed, this was likely when Knox took over as head of the drafting department, where he had control over construction detail and supervision over the sandblast department.

In 1922, Knox took out an ad in the Manual of Monumental Lettering, a book published by the Monumental News magazine, where he advertised “Plates of full-size letters for sand-blast work”. Knox’s was perhaps the first machined (rather than printed) alphabet marketed to the industry for duplicating letters for inscription work. Due to the many similarities contained in the first Spacerite Classic Roman letter set, it is likely that Knox’s alphabet was influential in the creation of the Spacerite alphabet and system, which was introduced only a few years later by Timothy Jellow and George Di Bona. Knox’s plates contained a Classic Roman style alphabet with old-style numerals which could be purchased in 5 sizes, varying from 1 to 2 inches, in normal or reversed orientation (which Knox referred to as right-hand or opposite-hand). With both plates, a draftsman could either trace the letters to be used for sandblasting on stone or create full-sized drawings.

Though it is somewhat rare to find in the cemetery, the plates did receive fairly widespread use, as the alphabet has been found on memorials in Pennsylvania, New Jersey, Michigan, Texas, and as far as Washington State on the west coast–dating from 1924 to 1951.

Knox continued his ingenuity and in 1939 was issued a patent for a sandblast shaping process, which he assigned to the Jones Bros. Company. 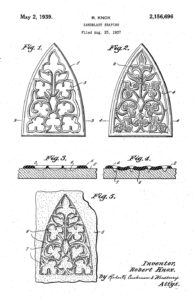