Timothy Jellow was a memorial draftsman, lettering specialist, inventor, and founding partner of the Spacerite Company along with Antonio “George” Di Bona.

Born in 1891 in Mulgrave, Nova Scotia, Canada; by 1892 Timothy’s family moved to Massachusetts in the United States. After high school, he attended an art school in Boston, and on August 28 of 1915, was married to Helen Hartley Kenney of Charlestown. Helen was one of the children of John H. Kenney, owner of a bakery on Bunker Hill St. 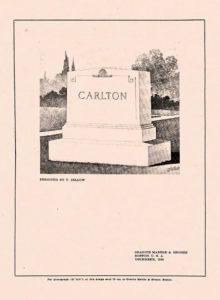 Working as a draftsman, it is known that Jellow was employed by the Deane Monument Company of Mattapan, Massachusetts (the company later moved to Roslindale). It is not known whether he worked for any other firms, though it was not uncommon for a draftsman to be employed by multiple shops over the course of their career. In 1920 he had two designs published in the December and April issues of the trade magazine Granite Marble and Bronze, and in 1929 worked as a consultant in charge of the scale and design of the lettering for a soldier’s memorial erected by the city of Milford, New Hampshire. However, Jellow received most of his success with George Di Bona as a founding partner of the Spacerite lettering system beginning in 1925. By 1926 Jellow and DiBona had set up shop in Quincy, and according to the city’s 1926 Inaugural Address were together granted permission for the creation of the new streets of Alton Road, Madison Avenue, Dale Avenue, and Crest Street. The reason for the two partners’ interest in the construction of the streets is unknown. 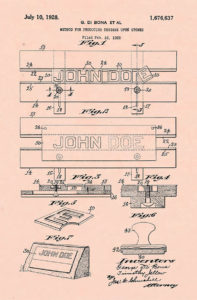 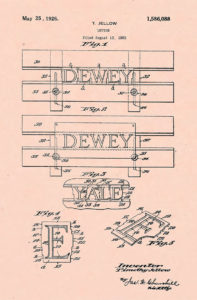 Jellow received four patents during his lifetime, all relating to methods of speeding up the layout and sandblast process of inscriptions on monuments. The first two of the patents being for the Spacerite Company. Jellow and Di Bona applied for their first patent for the Spacerite lettering process in February 1925, and Jellow himself submitted a second application for the spacing process in August of the same year–assigning one-half of the patent to George Di Bona. The two began production of the metal alphabets and layout rack system in 1925 and received the patent approval for Jellow’s second application in 1926. For reasons unknown, the first application would be approved much later, in 1928. The process was wildly successful, and many manufacturers still use it today, even in the face of other physical and digital technologies that have increased the simplicity and speed of creating layouts ready for sandblasting. 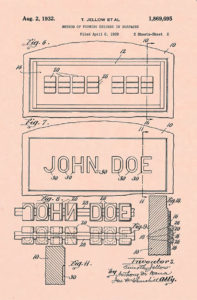 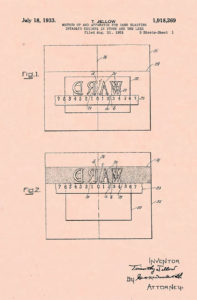 Jellow continued his penchant for invention, applying for two more patents pertaining to preparing lettering and designs for sandblasting in 1929 and 1931. It is unclear as to whether either of these solutions was ever marketed to the industry, as no evidence of their production or use is known to the Monument Lettering Center. Unlike the Spacerite system, both of the processes for Jellow’s later patents included utilizing letters made of plaster-like material which would be pressed into a pre-heated stencil but would be destroyed by the sandblast process. While the new patents aimed to speed up the process by removing the need for hand-cutting the stencil, the destruction of the lettering and added complexity was a step backward in ease and reproducibility. Jellow’s final patent was approved in 1933 after his death and assigned to his wife. 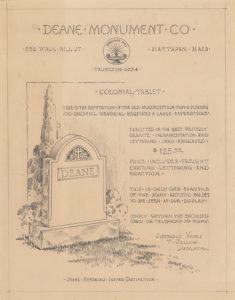 Deane Monument Company, where Jellow once worked, later moved to Roslindale, Massachusetts, and was eventually purchased by Davis Monuments sometime after the 1980s. The company found an original drawing for a Deane Monument Co. advertisement drafted by Jellow and gifted it to his granddaughter who was researching family history at the time. The date of the drawing is unknown, but it is likely from the early to mid-1920s.

Timothy Jellow is buried at Mt. Wollaston Cemetery in Quincy, though his grave has no stone. It is unfortunate that the man who helped create the system responsible for lettering the majority of memorials in North America during the 20th century does not have a memorial of his own. The Monument Lettering Center is still in the process of researching information related to Mr. Jellow’s life and work. According to family members, no known photos of Mr. Jellow exist. If you are aware of any photos or historical information involving Timothy Jellow, please contact the MLC.

The MLC would like to offer a special thanks to Timothy Jellow’s granddaughter, Barbara Haines, for her help with much of the family history in this article, as well as the use of Timothy’s Deane Monument Co. sketch.