Digital Common Gothic font based on Spacerite’s Round Corner Gothic. Both OpenType and TrueType formats included with the download.

The Spacerite Round Corner Gothic saw moderate usage between its creation in 1925 and the late 1960s, as both a sandblast or hand carved alphabet. During the second half of the century usage of the alphabet began to decrease, though in 1968 with the introduction of the stencil press new versions were introduced and the style does still receive some usage today.

Rounded gothic style letters, also often referred to as Commercial Gothic and later given the derogatory term “Common” Gothic, gained popularity in the second half of the 19th century as granite usage continued to rise. Due to its hardness, the introduction of granite made intricate lettering more time consuming and difficult. While Square or Splayed Corner and Block alphabets were used mainly for raised lettering, the Round Corner Gothic was mainly used for incised hand carved inscriptions until the usage of the sand blast began to rise. The Round Corner Gothic alphabet was the third letter set produced by the Spacerite Company, and one of only 3 produced before the patent for the spacing method was received by the company in 1926. The first alphabet designed being the Classic Roman, followed by the Modified Roman, and lastly by the Round Corner Gothic. 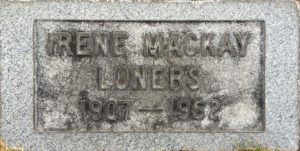 Example of a gravestone using the Spacerite Round Corner Gothic Alphabet.

The designer of the alphabet was likely Timothy Jellow, who was the creator of the Spacerite system and is believed to have also designed the Classic and Modified Roman alphabets.

The geometry used is nearly the same as the later Splayed Corner Gothic, but with fully rounded corners. The alphabet contains the typical commercial gothic style, which is not highly distinguishable from others due to its simplicity. The tail of ‘Q’ in the Spacerite Round Corner Gothic, however is noticeably thinner than the rest of the strokes of the letters and does not cross into the counter. The notched ‘1’, which distinguishes it from the letter ‘I’ is also a feature of most Gothic fonts in the memorial industry, but not always used outside of it.

The alphabet was originally produced with no ‘Q’, as stencil cutters were expected to add their own tail to ‘O’. A ‘Q’ was eventually added to the alphabet at an unknown time. No punctuation was originally produced, and though it may have been designed later, none has been found by the MLC for the original Spacerite sets. Because the Splayed Corner Gothic shares the basic geometry of the Round Corner Gothic and did come with punctuation, its ampersand, period, and dash were used as the starting point – but the MLC rounded the corners to match.