A digital Lombardic font based on the Floyd A. Holes Classic Roman metal alphabet plates. Both OpenType and TrueType font formats included with the download.

Created for tracing letters to be hand cut from sandblasting stencil, this alphabet saw the majority of its use from 1940s to the 1960s.

Though the exact design date is unknown, this Lombardic alphabet was likely first produced on copper lettering plates by the Floyd A. Holes Company in the late 1930s or early 1940s, and continued to be produced and marketed later by the joint venture Holes & McClellan. The alphabet was released at different sizes on plates No. 7, 8, and 9. Plate 8 also included an IHS symbol, two styles of rosettes, and Masonic emblem. 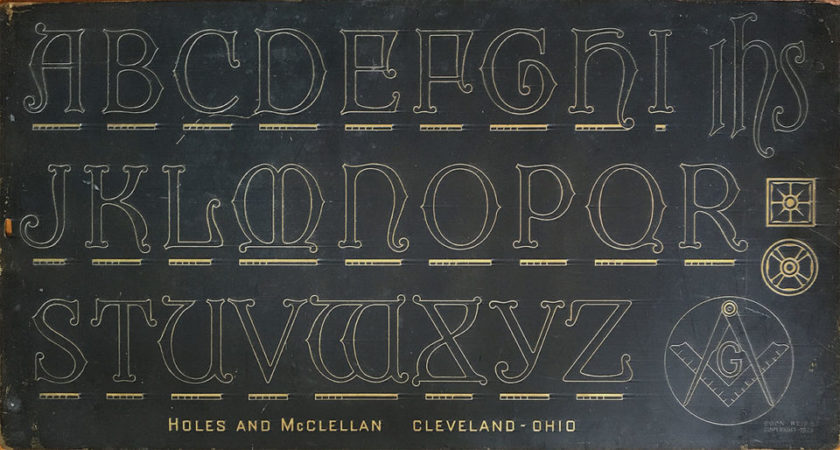 It is likely that the designer of this Lombardic alphabet was either Egon Weiss or someone highly influenced by the Lombardic alphabet he designed and printed in his 1932 book The Design of Lettering, in which he detailed the system of letter spacing used on all the Floyd A. Holes lettering plates. Though the alphabet differs from his printed design, his name is engraved in the bottom right corner of the Lombardic plate–but it is uncertain if the inclusion was meant to give him credit for designing the alphabet, or merely for using his system of letter-spacing. 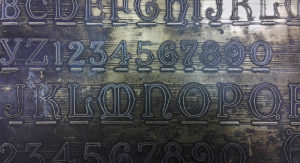 Holes & McClellan Lombardic lettering plate No. 7, containing the alphabet and numerals in 3 sizes.

The plate contained no punctuation, and as such, all punctuation and extra characters have been created by the MLC. The ampersand previously designed by the MLC for the Floyd A. Holes Modified Roman font was used as inspiration for the ampersand included in this Lombardic font. No alternate characters were included on the lettering plate, but the MLC has included an alternate ‘A’, ‘L’, ‘M’, ‘T’, an two ‘W’s–in order to match alternate versions of the letters seen on various memorials where the alphabet was used. A second ‘2’ was also created by the MLC. The rosettes from the plate have been included, as well as a cross (dagger) with an alternate. These alternate characters are available as OpenType alternates when using software which supports OpenType features.