Digital font based on Spacerite’s Special Roman 2 alphabet. Both OpenType and TrueType formats included with the download.

Receive $25 off when you purchase both this font and the MLC Condensed Special Roman 2 font at the same time. Use coupon code “special25”

The Special Roman 2, or “Special Roman II” alphabet was created specifically for sandblasting, and saw most of its usage between the 1960s and 1980s. The style still receives some usage on headstones and memorials today, due to its digitization for various monument design software. In some software it is named simply “Classic Roman” and was mislabeled as “Special Roman 1” in the Craftech monument design software (prior to its discontinuation), though in fact Special Roman 1 is a separate Spacerite alphabet altogether. Because of its unique features this alphabet warrants more “novelty” usage; and is often used only for engraving the surname in large letters.

The designer of the alphabet is currently unknown to the MLC.

The MLC had previously estimated a date of creation during the early to mid 1960s, but it has since been found that it was released along with the Special Roman 1 letter set in 1966. These two alphabets being the last known sets produced by the Spacerite Company. The style of the alphabet pre-dates the Spacerite Company’s version, and is often also referred to as “Barre Old Style”; after Barre, Vermont. Hand drawn versions of this style have been seen in the cemetery, containing numerals and characters which differ from the metal Spacerite letters, though the company’s version remains the most widely used.

Nearly everything about this alphabet distinguishing itself from other monument alphabets. The extremely wide serifs, along with the downward angled spurs on the crossbars of many letters and tapering stems immediately set it apart from other styles. A somewhat classic roman geometry has been employed, but most letters are wider than would be traditionally used for a classic roman alphabet.

The original alphabet contained an ampersand, but no other punctuation. The MLC Spacerite Modified Roman dash has been re-used, as well as the punctuation created for it. The original metal alphabet contained a second ‘K’ containing a much longer leg, and the MLC added a second ‘W’ by overlapping two ‘V’s, which was not part of the original alphabet but has been common practice in the industry when a ‘W’ is missing. These characters are available as OpenType alternates when using software which supports OpenType features. 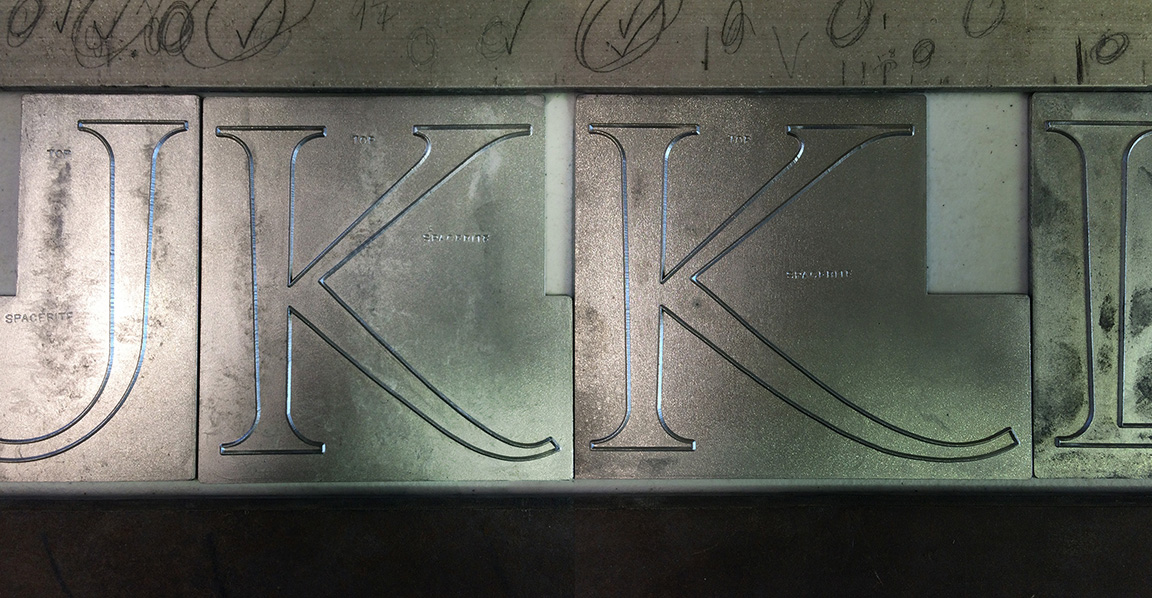