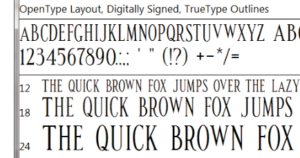 Windows users may have previously seen an issue rendering the lowercase letters of some MLC fonts.

The update includes a fix for a Windows font hinting issue, and some small kerning updates, especially on some European language glyphs. The Windows operating system contains a bug which caused display issues of MLC fonts containing small-caps as lowercase letters. The bug is a display rendering issue only, and once letters are expanded/outlined into vectors they render correctly on screen and cut normally when sent to a plotter. The MLC removed auto-hinting from the fonts to workaround the issue. This was a Windows only issue, Macintosh users were not affected.

In addition, the MLC is excited to announce the release of 6 new fonts since the beginning of 2018, including the following: